Latest news from around the world

Tourism in Uganda has its roots to when future prime minister Winston Churchill visited the nation in 1907 and dubbed it as the “Pearl of Africa” for its colourful nature.

In the late 1960s, Uganda was visited by 100,000 international tourists each year. Tourism was the country’s fourth largest earner of foreign exchange. The tourism industry ended in the early 1970s because of political instability. By the late 1980s, Uganda’s political climate had stabilised and conditions were suitable for reinvestment in Uganda’s tourist industry.

Uganda has a very diverse culture, landscape, flora, and fauna.

Game viewing is the most popular tourist activity in Uganda. Wild animals like lions, buffaloes, giraffes, antelopes, elephants are common in Uganda’s ten national parks. Uganda is one of only ten countries where it is possible to visit endangered gorillas.

Mountain gorillas are Uganda’s prime tourist attraction.The vast majority of these are in Bwindi Impenetrable National Park, with a few others in Mgahinga National Park, both in southwestern Uganda.In Bwindi, visitors have been allowed to view the mountain gorillas since April 1993. The development of gorilla tourism and the habituation of gorillas to humans is proceeding very carefully because of the dangers to gorillas, such as contracting human diseases.

Meanwhile, Queen Elizabeth National Park is home to the tree climbing lions. Lions do not normally climb trees, except when chased by another lion group or wild buffalo. However the tree climbing lions found in QE-NP intentionally climb trees and rest on them in the afternoon, when the sun is high. This is a unique phenomenon. There have only been rare similar sightings of this in Lake Manyara National Park of Tanzania.

With its prime location in the African Great Lakes region, Uganda has a variety of water bodies that are popular spots for tourism. White water rafting and kayaking are popular activities on the rapids near the source of the Nile at Jinja.

Boating which is commonly done on Lake Victoria, Lake Mburo, Lake Bunyonyi, Kazinga Channel, and River Nile is a perfect way of exploring the buffaloes, hippos, crocodiles and a wide variety of bird species that inhabit the banks of these water bodies. Sport fishing is another favorite tourist activity. Fish like the Nile perch, and tilapia can be caught in designated areas of Lake Mburo and the banks of the Nile. Canoeing can also be done at Lake Bunyonyi.

Uganda has many opportunities for mountain climbing, hiking and nature walks. The Rwenzori Mountains, which are found at the border with the DRC, include the snowcapped Margherita Peak (5109 m), the highest Mountain Range in Africa and also one of the highest peaks. Mgahinga Gorilla National Park also includes three peaks, Mount Gahinga, Mount Sabyinyo, and Mount Muhavura, the highest peak in the national park. Mount Elgon, located in Eastern Uganda, can be used for hiking and climbing, and also has one of the largest calderas in the world.

Religious tourism is a steadily growing tourism product niche in Uganda after wildlife-based tourism. However, limited research has curtailed planning and development of religious tourism in the country.

Uganda has many cultural sites.

A UNESCO World Heritage Site, originally Kabaka Muteesa I’s palace (1880-1884), the graves of Muteesa I, Mwanga II, Daudi Chwa and Muteesa II are found in the main house which was reconstructed after a fire in 2010.

HISTORY OF THE BATWA

The Batwa also known as the Twa in Rwanda are an indigenous group of people who originally lived in the ancient Bwindi forest in Uganda until it was gazetted as a National park in 1991. The Batwa lived in harmony in the jungle with all creatures including the mountain gorillas. The Batwa were regarded as the Keepers of the forest.

Since the Batwa are not allowed to stay in the forests, the Batwa culture had started to diminish since 1992 after their eviction. Nevertheless things begun to change by 2011 where the Uganda Wildlife in conjunction with USAID (United States Agency for International Development plus the Embassy of Netherlands in Kampala started the Batwa Cultural Trail found in Mgahinga Gorilla Park. On this trail the tourists that visit the park and are interested in culture they are led by Batwa locals through the jungle, they basically teach the tourists their ancient gathering and hunting ways. After the visit Batwa Guides head back to their community, the Batwa also receive a percentage of the Batwa Trail Fees. Remember that tipping them is also accepted.

Tags: the pearl of Africa, uganda

At Trots and Safaris, we believe that a safari has the power to change us. When you visit Africa, you experience a different type of people, wildlife and culture.

We provide the experience that leaves you transformed, invigorated and fulfilled, something that we have been doing for the last 07 years.
All our tours are affordable high quality tours. You can choose to fly to the safari destinations or enjoy our customized safari vehicles.

Review Us on Safaribookings 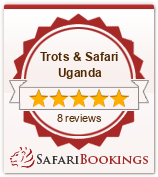 Close Menu
1
Translate »
Manage Cookie Consent
To provide the best experiences, we use technologies like cookies to store and/or access device information. Consenting to these technologies will allow us to process data such as browsing behavior or unique IDs on this site. Not consenting or withdrawing consent, may adversely affect certain features and functions.
Manage options Manage services Manage vendors Read more about these purposes
View preferences
{title} {title} {title}